In today’s episode of Champagne meets sushi we have a guest star: Cava. Our first bottle of Cava comes from Wine Library and comes highly recommended by Ian. Cava is a sparkling white wine produced primarily in Catalonia, Spain and is typically made from Macabeu, Parellada, and Xarel-lo grapes. It’s produced via the champenoise traditional method which means the carbonation is produced via secondary fermentation in the bottle, just like Champagne. Dinner included the standard fare, some of which can be seen in the picture, as well as Ootoro sashimi and a new specialty roll. Since we often do take out we like to play a game and see how many sets of chopsticks they give us in the bag…basically suggesting how many people they think will be eating the food. The other night we set a new personal best with 5 sets of chopsticks! Of course we sat, drank, and conquered without issue.

colonelgrape: 90. This bottle followed through with Ian’s “wild and crazy” proclaimation at the store. I had no idea what to expect from these grapes but it was delicious. Beautiful apple, pear, honey, and citrus notes dominate the nose and palate, very alive and fresh tasting, refreshing. Interestingly enough I found it easier to drink than most Champagne, more like an Asti which is produced via the Metodo Charmat method. The bubbles looked larger and more prevalent in the flute and felt softer on the palate. Being brut natural I was worried it may be too dry for Moby but the citrus gave it just the right balance and it all came together for a great bottle of wine…one I’d definitely recommend. At $33 a bottle it’s cheaper than almost all similarly aged vintage Champagne and something you could bring to wow someone who loves Champagne.

MobyGrape: 91.  Hola Cava!  What a treat this was.  The Colonel dropped a bomb on me by actually reading the label and informing me it was Brut Natural, which in my head translated to “this is going to be completely disgusting”.  Color me surprised by the first sips though, because I enjoyed it more than some of the champagnes we’ve had.  The bubbles were a healthy size, but they were softer.  Keep in mind I have no idea if this is actually possible, it may have only been in my head.  Normally the champagne bubbles are very agressive and in your face, like they’re trying to punch through the roof of your mouth and into your brain.  Not the cava though!  The cava bubbles just wanted to bounce around in there for a little bit and spice things up, then go on their merry way.  And as far as the Brut Natural scare, I was pleasantly surprised with a flavor that wasn’t sweet by any means, but it wasn’t sour or too tart.  Went down easy and paired excellently with sushi.  Looking forward to more cava experimenting!

It’s been a while since I’ve taken the helm here and posted something, so hold on tight friends, this might not be pretty.  You know what is pretty though?  The delightful beverage Sangria.  I’ve searched far and wide for the perfect recipe, and one fine day I managed to get my hands on it.  The only problem is that it called for Fanta Limon, which, as it turns out, in the US is like trying to find a unicorn.  Every time I thought I saw it from afar in a supermarket soda aisle, I would run towards it (in slow motion, obviously), and it would turn out to be pineapple instead.  Thankfully, I have a wonderful friend who I can safely say has changed my life forever, because she gave me her recipe and it recreates the Fanta Limon flavor perfectly.  I’m not going to post the recipe because it’s not mine to share, but perhaps one day she’ll let me.  It may even result in world peace, much like the music of Wyld Stallyns.  A critical element of good sangria is the fruit in it.  You want fruits that are going to not only enhance the flavor, but really soak it up.  It’s ok, I’ve totally convinced myself that fishing your fingers around in the glass like a wild animal to eat the fruit is always classy.  My recommendation would be apples (you could probably get away with any type, but I find something crisper like a Granny Smith works best) and orange slices.  I think sangria may be a close second in the race for drinks that just make me happy, plain and simple.  Of course champagne/sparkling wine related beverages would probably take the top seat, but sangria is fruity, it’s fun, it makes me feel like I’m at a barbeque in July even if I’m drinking it in the middle of winter.  You’ll be hard-pressed to find a situation where it’s inappropriate. Attempting to get dinner ready and not burn the house down?  Pour yourself a glass of sangria!  Feel guilty about opening a bottle of wine immediately after work?  No need to feel guilty here, the pitcher is always open!

All right ladies, the old ball and chain is keeping you waiting and you proooomised to wait for him to drink the good wine that evening.  But you’ve had a long day and a beer just won’t cut it.  What’s a thirsty gal to do? 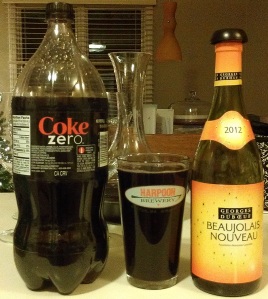 There’s only two ways for terrible wine to redeem itself in my book. This is one of them. Meet the Calimocho. I picked this up over in Spain, thanks to an unnamed bartender who unknowingly changed my drinking life forever (for the better). I believe the conversation went something like this…

Me: “Señor, how do you make this heavenly bebida?”
Bartender: “Guapa, this is an ancient Spanish recipe. Come with me, I will make passionate love to you and share all of my secrets. I can’t believe it’s not butter!”
Me: *Swooning* “Sí, sí!”

Ok, so that’s not really how it happened, and my fantasies may be getting a little mixed up. It was more like I asked what the hell I was drinking in broken Spanish (give me a break, it was the beginning of the trip), and I was told to use the cheapest red wine I could find, and the nicest cola I could, and mix them together 1 to 1.

Does it sound disgusting? You betcha! Is it glorious? You have no idea! I’m trying to find the silver lining in the Beaujolais Nouveau cloud. And I have to say it turned out pretty well. I went straight up half wine, half Coke, but you can change up the proportions depending on how you’re feeling. So congratulations Beaujolais Nouveau, you have a new lease on life in my fridge! Salud!

Rioja is one of the most common Spanish iwnes you’ll find on the shelves at the local store. It’s typically a blend of Tempranillo, Grenache, Graciano, and Carignan grapes with Tempranillo being the primary grape (usually 60% ish). Most Rioja wines are aged in oak barrels for various amounts of time depending on the classification. There are 4 classifications:

Rioja: Aged in oak for less than 1 year.

Crianza: Aged at least 2 years and at least 1 year in oak.

Rioja Reserva: Aged at least 3 years and at least 1 year in oak.

Rioja Gran Reserva: Aged at least 3 years and at least 2 years in oak.

Kind of like French wines, you may not see all the information you’re looking for on the labels. What’s the blend? What classification is it? It’s a European thing. In America we label our wines by varietal whereas in Europe it’s by region and you’re just supposed to know them. I’m getting there with my French wines but Spain is project for the distant future. What can you take away from all this information? Rioja is good and you should try it.

colonelgrape: 82. We found this 2005 Reserva for $25 so it’s a very affordable wine. The wine itself was a very dark purple and had good spice, earth, and tannins…probably why it worked so well with the rustic Italian food we had. There’s something about Spanish wine that I can’t quite put my finger on…I do enjoy Rioja I just can’t figure it out yet. When I have Tempranillo at tapas bars I get the same feeling. Maybe Tempranillo just isn’t my thing? I don’t know yet but the bottom line is that it’s a solid wine and I’d recommend it if you’re looking to branch out into Spain.

MobyGrape: 88. I think they found a way to bottle Enrique Iglesias’ primo.  It smelled like regular wine at first, and then the longer it sat out I guess it smelled a little funkier (but at that point, who really cares), but this is a great little wine.  Tastes a little fruity up front but it’s nice and smooth.  The longer it breathes the more bite it picks up.  For a while I thought it had a little caramel flavor but then again there’s an excellent change I’m only imagining that.  This was perfectly fine with food, and it’s perfectly fine on its own.  What’s even more perfect is that the Colonel had to go and the rest of the bottle is allllll mine. 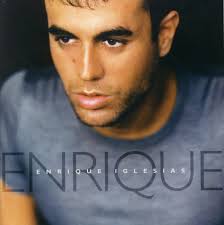 Don’t worry, there’s a good reason these two pictures are included.  I don’t really remember what it is right now, but just enjoy the pictures and leave me alone.  This wine is Spanish, and I’m pretty sure Enrique Iglesias is too, but that’s where my research ends.  From my brief search on the wine it looks like it comes from the Cataluña region in Spain, and that’s A-OK with me.  Barcelona is a great city, and if anyone wants to send me there to do some research, I’m a great ambassador.  Even if it doesn’t actually come from that region, please don’t ruin it for me.  I enjoyed this wine a great deal more than the Colonel, and I think he wasn’t feeling well when he had it becuase he didn’t even review it, but I was fine with that since it meant I got to drink most of it myself.  I think it was around $30, which I still cringe at for a bottle of wine but it actually does make a difference.  Don’t worry, I’m not a snob, I’m just facing the hard truth that I can’t be cheap all the time.  So here’s my review of the wine, one day I’ll get it back in the house and maybe the Colonel will review it then.  If not, I’ll get the bottle to myself.  That’s what we call a win-win.

MobyGrape:  91. Can’t really identify the flavors but I don’t care. Very smooth and easy to drink, with a meal or alone, although I don’t know if I’d put it with a steak. I do know that I’d have this Enrique Iglesias hot buttered soul stomper any night of the week and enjoy it.