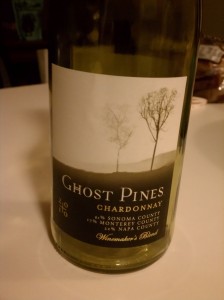 So I’ve never been wowed by chardonnay, to me it always seemed like rat piss.  But here I am, with a sophisticated palate, giving it a fair shake.  Someone told me to try a “buttery chardonnay” because they normally didn’t like rat piss either, and since I’m trying to be more open, I went into the wine store, hot on the Colonel’s heels, and after he finished discussing the finer points of some french wines with a very kind gentleman who works there, I promptly embarrassed us both by proclaiming that I wanted the butteriest chardonnay he had.  I thought that would make me sound sophisticated and knowledgeable, but as it turns out I just sounded like an ass, and now I stick to being the silent partner when we’re buying wine.  We were promptly pointed to the chardonnay area and given a couple choices, we kind of grabbed this one because it wasn’t the cheapest, but it wasn’t the most expensive, and the guy at the store seemed to promote it.  I just looked something up that said chardonnay is the favorite white wine in America.  Seriously?  I must be missing something, because no one I know likes it.  Is versatile another word for bad?  If wine is made from grapes, why can’t it taste like grapes?  No one ever says “this wine tasted like a grape”.  Why do they have to try to get a bunch of other stuff in there too?  Is someone squeezing pears and lemons and apple pie and dirt into the barrel too?  I think I actually do need to learn more about the winemaking process because this is just blowing my mind tonight.  We ate it with salmon and pasta.  I have to get out of here, my head hurts.

MobyGrape:  70.  I think I understand why the vineyard is named Ghost Pines.  There was a fruity flavor up front, and then it promptly disappeared.  The more it warmed up in the glass the more buttery it smelled and tasted, so then it was sort of like buttered fruit.  As it turns out that’s not a great flavor.  But don’t worry, it still disappears quickly and it’s like you never drank it at all.  If I had to drink chardonnay again, I’d go buttery, and I’d even have this one in a pinch.  At least it was a friendly ghost.

Colonelgrape:  61.  I’ll be first to admit I am not a Chardonnay guy but I was willing to give this a chance. I made it through 1.5 glasses before giving up. The back of the bottle claims tastes of baked apple, pear, and a sweet vanilla finish. I got the pear and then nothing followed by alcohol followed by nothing. Just an empty white grape tasting vessel of nothing. We served it cold but the warmer it got in my glass the worse it tasted. I wouldn’t say it was appalling as I did make it through a glass, but it was not good. I am willing to give Chardonnay another chance but it would have to be a well documented superior bottle. I’m at the point where I can simply say Chardonnay just isn’t for me.