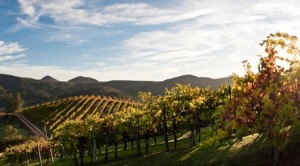 This was the first stop of Grapestorm’s Napapalooza and they set the bar quite high.  We arrived bleary eyed after the drive from San Francisco, and tired after we emerged from what we now know is called the marine layer (also known as the layer of clouds that appear as though someone just cut them at one point and said “San Francisco, you take all these clouds, everyone north of here enjoy a nice clear blue sky”).  Anyways, after driving along an incredibly windy Rt. 128 to the vineyard, I thought I might be too queasy and windblown to enjoy any day drinking (weird, I know!) especially since I indulged The Colonel on an open-window drive to fully appreciate the sweet, sweet maneuvering of our reasonably priced midsized sedan rental car.  From the second we walked in, we were greeted warmly, offered use of the restrooms (my hair and I were thankful for that), and most importantly, poured a glass sauvignon blanc.  I can’t accurately say if I thought it was good wine or not, because it was so crisp and refreshing after the drive.  I have to admit that we weren’t overwhelmed by any of the wines we tasted there (cabernet sauvignon, zinfandel blend, and the sauv blanc) but the experience of the tasting was difficult to match.  We were able to tour the property, including watching wines being pressed, saying hi to a handful of the winemakers, and the best part easily was riding in an open-air buggy around the vineyard.  Not only did we learn more about the wine making process, but we learned more about how the grapes are grown, tasted a few different varietals (Grenache won, hands down), not to mention we ate our way through the other fruits grown at the vineyard.  It was an unexpectedly down to earth experience that caught us completely off guard, but it served as the sigh of relief you take when you finally realize that you’re on vacation, and it’s going to be awesome.  Appointment only, gorgeous views, just be ready for the drive there.

Larkmead was the second stop on our first day of tasting. When we pulled up we say a beautiful white house surrounded by fields of grapes. We met our host, Sonny, who brought us into the vineyard to sample merlot grapes from the vine and discuss some of the finer details of growing. He was a southern farmer transplanted to Napa and great to chat with. We also stopped by their grape press for a moment before heading to the porch which you can see in the picture. Great view, a nice breeze, and the sun was out…perfect tasting weather. We sampled the following wines: Tocai Fruilano (old school Italian white), Sauvignon Blanc, Napa Valley Red Blend, Cabernet Sauvignon, Firebelle, and LMV Salon. The two that stood out were both were Bordeaux style blends, Firebelle (right bank) and LMV Salon (Left bank).  Firebelle being the Corvette and LMV Salon being the Ferarri taste wise. Sonny shared that the LMV Salon came from a small section of grapes in their vineyard that produced exceptional grapes and that no matter how hard they’ve tried they simply cannot reproduce the quality elsewhere…and they’ve tried everything. In fact it’s so exclusive you can only get it 1 of 2 ways: buy a large package of wines or be on their Firebelle allocation list for a year and then get on the LMV Salon list. We loved the Firebelle so for us it was a no brainer, we’re on the list to get a half-case of Firebelle this winter and next summer we’ll be on the LMV Salon list. Larkmead may not be well known to the public because they do not ship to stores so the only way to get Larkmead wine is to order it directly from the Vineyard.

Normally we aren’t wowed by California wine but Firebelle and LMV Salon certainly wow’ed us…If you’re adventurous and like Bordeaux I’d get on the allocation list now…the current vintage is drinkable now and will age well. Look for our reviews of these wines early-mid 2014. We would recommend visiting Larkmead if you’re heading to Napa just make sure to call ahead as they are appointment only.

Moby and I spent the past week in Napa tasting and had a fantastic trip. We spent a night in San Francisco and the rest of the trip in the Valley. The weather was great, the wine was good, and the food was fantastic. This view here is from the terrace at Joseph Phelps. Moby and I will be making some posts about each of the wineries and restaurants we visited. Overall though it’s a great place to visit just be prepared to bring your wallet. Stay tuned for everything Napa.

We decided to take a ride to the new Vin Bin last night for their Thursday night tasting and found a few treats. This 2008 Syrah is from the Sierra Foothills AVA which is located directly east of Napa at the base of the Sierra Nevada mountains. It’s young and only cost $25 but it tasted well so we picked up a bottle.

colonelgrape: 85. We had a cork disaster opening this bottle but were able to recover and not need to filter. At first taste it was harsh and overwhelming, unlike at the tasting. It was at room temperature which wasn’t helping and so we threw it in the decanter and in the fridge for 20 minutes. A little air and being at the proper temperature did the trick and the wine opened up nicely. Classic Rhone Syrah nose of dark fruit, spices, black licorice, and earth. On the palate similar flavors came through. Long finish with notes of pepper and black cherry. Plenty of fruit but not too fruity. I may have liked it better with a slightly lower alcohol content…at 15% we noticed it at the end of the night and it can kind of sneak up on you. I think this drinks well now but would be better with 2-3 more years in the bottle but I like old Syrah. Overall a fun wine for a decent price.

MobyGrape: 87.  This was a strong showing from a syrah we picked up on a whim after a rando Thursday night tasting.  At one point I thought it smelled like caramel and butter, and at one point I decided it tasted buttery too.  I’m not sure if either of those statements are entirely accurate, but it was really quite smooth once it opened up.  We decanted it for a bit (not sure if you have to) because the cork split when we were opening it, and maybe that helped since the first few sips (with half of the cork expertly rammed into the bottle) were ok, but a little tight.  But after it sat for a bit it was much more mellow.  I can’t really identify what it tastes like, if it’s fruity I can’t tell what fruit this is, but it’s good.  Like I want to try it with chocolate or a dessert for some reason.  Or maybe I just want dessert.  Either way, use this as an excuse to have syrah and something sweet. 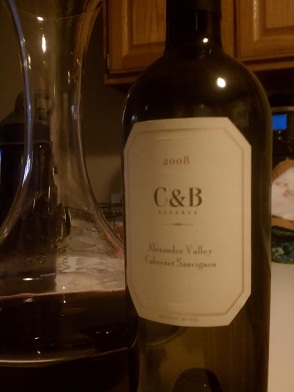 We opened our first Cabernet of the grilling season with teriyaki steak, peppers, and onion kabobs and sausage stuffed mini pepper kabobs. The stuffed peppers were sweet and offered a nice contrast to the steak and vegetables. We’re getting back to basics with this wine pairing. I got this bottle from Bottles on Commercial St in Boston last year for $17.

colonelgrape: 78. Not a bad bottle but just not my thing. Classic jammy cab, huge dark fruit flavor, tannis were actually under control but we decanted for 30-45 mins prior to drinking. When I first started getting into wine I started with Cabernet and I would have absolutely loved this wine. If big jammy California Cabernet is your thing this bottle is for you. Over time though my palate has changed and I like wines with more structure, rustic flavors, subtlety, or finesse. If I am in the mood for a big wine I’ll go for a Chateauneuf du Pape, Barolo, Barbaresco, Montepulciano d’Abruzzo or Bordeaux vs a fruit bomb California. Not all California Cabernet is this jammy but many of them are so you’ll need to do your homework when choosing a bottle.

MobyGrape: 86.  I don’t know what’s happening to my palate these days.  This was
a delicious wine, it was fruity and in an odd way it almost seemed sweet.  I don’t actually mean it was a sweet wine by any means, but we’ve been drinking so many decidedly not sweet wines, this tasted like licking a jar of Smucker’s.  We decanted it for maybe 30 min before drinking, and there were hardly any tannins to speak of, just a whole lotta fruity goodness.  Wasn’t overpowering, and for the price it was a perfectly acceptable weeknight grilling wine.