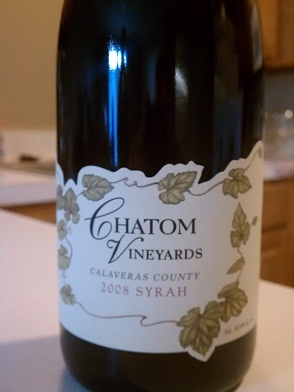 We decided to take a ride to the new Vin Bin last night for their Thursday night tasting and found a few treats. This 2008 Syrah is from the Sierra Foothills AVA which is located directly east of Napa at the base of the Sierra Nevada mountains. It’s young and only cost $25 but it tasted well so we picked up a bottle.

colonelgrape: 85. We had a cork disaster opening this bottle but were able to recover and not need to filter. At first taste it was harsh and overwhelming, unlike at the tasting. It was at room temperature which wasn’t helping and so we threw it in the decanter and in the fridge for 20 minutes. A little air and being at the proper temperature did the trick and the wine opened up nicely. Classic Rhone Syrah nose of dark fruit, spices, black licorice, and earth. On the palate similar flavors came through. Long finish with notes of pepper and black cherry. Plenty of fruit but not too fruity. I may have liked it better with a slightly lower alcohol content…at 15% we noticed it at the end of the night and it can kind of sneak up on you. I think this drinks well now but would be better with 2-3 more years in the bottle but I like old Syrah. Overall a fun wine for a decent price.

MobyGrape: 87.  This was a strong showing from a syrah we picked up on a whim after a rando Thursday night tasting.  At one point I thought it smelled like caramel and butter, and at one point I decided it tasted buttery too.  I’m not sure if either of those statements are entirely accurate, but it was really quite smooth once it opened up.  We decanted it for a bit (not sure if you have to) because the cork split when we were opening it, and maybe that helped since the first few sips (with half of the cork expertly rammed into the bottle) were ok, but a little tight.  But after it sat for a bit it was much more mellow.  I can’t really identify what it tastes like, if it’s fruity I can’t tell what fruit this is, but it’s good.  Like I want to try it with chocolate or a dessert for some reason.  Or maybe I just want dessert.  Either way, use this as an excuse to have syrah and something sweet.